I can’t even to begin to describe the teaching feat that Warren accomplished in a few short months. I had gone from knowing nothing about Shakespeare to not only having a solid understanding, but having a love and appreciation for Shakespeare’s work that I had never had before.

Whether it is for an upcoming audition, a self tape or working on a monologue for your repertoire, Warren can help you dig deeper and make connections to the text that you are unable to achieve without a director.

Coaching sessions are £40 per hour

There was never a moment when I wasn’t learning and growing as an actor and person while working with Warren. After we learnt the theory and significance of the lines he would take it to the next step by helping us make smarter, stronger, and better choices in the application of our work. The work for him did not just end with the script, but transcended to the stage. Any actor would be doing themselves an injustice if they did not work with Warren Rusher. 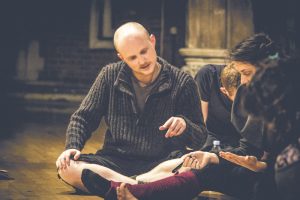 As company manager for the small Shakespeare ensemble, Passion in Practice from 2013 – 2016 Warren found a talent teaching drama students, professional actors and Shakespeare loving adults from other professions.

Warren designed an international Acting Shakespeare Masterclass series that was run in Vancouver, New York and London. He has also had a workshop proposal accepted by the world Shakespeare congress, and during his time with Passion in Practice he was a guest speaker at several Shakespeare conferences in America.

Warren Rusher takes on projects with an infectious confidence. It takes only a few words (or even a tap on the head) for him to inspire you with the confidence to go on stage and own a performance. His understanding of Shakespeare seems almost endless, and he catches every last detail, even the ones that no one else sees.